1.
One veteran (now a student) told me he fired three shots into one Iraqi. The guy didn't even go down. He has no faith in the 9mm yet alone the Beretta.
...............................
2.
This has dick all to do with the gun or the caliber. It has everything to do with the bullet used. Ball ammo sucks at stopping, with .45 ACP Ball doing better but still not great. A .40 firing ball would likely have the same effect. Further, shot placement trumps all. Three hits does not mean shit, vice three A zone hits. Given his probable training with the M9 and handguns in general, I am willing to bet his hits were not all in the vitals.

The M9 is fine in trained hands with proper ammo. I have owned a 92FS since 98, carried one on two trips to the sand, and had faith in the gun to do what was needed. I had no faith in the bullet. Fortunately, because I owned and practiced with my own, I shot the gun much better than most who rely on Uncles dismal pistol training (no gun/caliber is likely to perform better unless the training changes, period) and I felt confident that I could make the bad ammo work with good center mass hits.

As of yet, there is no magical pistol and/or caliber that will compensate for the shitty pistol training that the military gives to the rank and file. Officers, other than true infantry types tend to avoid petty shit like actually qualifying on the range so their attitude is to be expected. When they actually pull the trigger, they cant hit shit, and they believe that complicated means safer (as in Double Action triggers and Safeties). Given how little attention they actually pay towards pistol training for the troops, in a perverse way, they are correct.
...........................
3.
""It's a training problem." While items like sights, etc. can be upgraded, some things can't with the M1911. One of those things is training. Training for safety, training for effectiveness. When we had M1911's, not a month would go buy that we didn't have some guy injured or killed by an ND. They were like the old M151 jeep. You could count on two things showing up in the monthly safety publication "Countermeasures" that the Army had for ground systems. Those were jeep rollovers and .45 ND's that killed or injured someone. Both had more to do with training and leadership than anything else, and both were delt with as technical problems because that's how the Army likes to deal with things. The simple fact is you were not going to get majority of the people that carry pistols to train with them. The Army did worse in pistol training than police departments of the time. I'd bet it still does for most of it's people that carry the things. Here's the extent of pistol training I received in the US Army. I was issued a M1911A1 (Ithaca BTW) as a newly minted 2LT in a USAR Infantry BN as I completed college. I had one 15 minute class on it in ROTC a year prior. That was it. I shot about a box of rounds out of it for qualification once. DONE. I never shot another .45 in the service of my country again. That was the extent of pistol training in the US Army in the mid-80's for most units. I went to AVOBC and flight school. I went to my first unit (1st CAV) and was issued a .38 revolver. I had ZERO training on it. In the three years there I shot it once. I never received any training at all, none, zip, nada, on the .38, how to shoot, anything. I went to the AVOAC and had a 15 minute class on the M9. We qualed on it. They were brand new and shot great. I went to Korea and was issued a .38 revolver. I received no training at all. I shot it once for qual. I went to the 101st at Campbell and we received NIB M9's. We had a couple classes on them, and shot them at least twice a year. I ran the pistol ranges for the BN, as it was easier to do all of the pistol folks at once. I always did a two day range. The first day was a rehearsal, where we'd set up and make sure everything was set for the qual the next day. We would invite anyone int eh BN to come out and shoot that day and everyone that showed up was either a gun nut and could handle a pistol fine already, or needed the practice badly and we would give them individual instruction that bascially you never got in the Army. The BN CDR authorized plenty of extra ammo for this. The difference you see there is leadership. The chain of command in the 101st at the time wanted to train. Much of the rest of the Army didn't.
(c)c ихних форумов 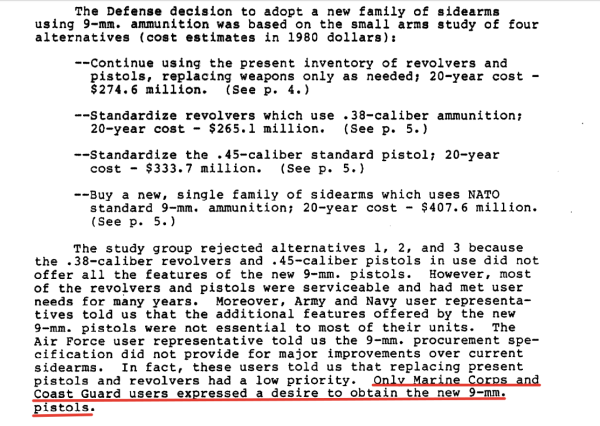